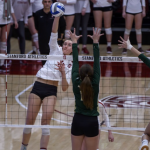 La Jolla High School volleyball star Madeleine Gates, class of 2016, won the 2019 Women’s volleyball championship for Stanford University.  After graduating from UCLA in 3 years, Gates applied and was admitted to the Stanford gradate school for Economics.  In the NCAA championship game, Gates had 10 kills with a .529 hitting percentage. Her brother 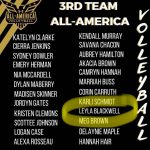 Leyla Blackwell named to the 3rd team Under Armour All American team, she is in the top 72 athletes nationwide to be chosen out of 894 nominees. Layla has committed to play  Indiana next year. The Vikings take on LJCD tomorrow at 5:00pm for the CIF state play- in game. l