On Thanksgiving weekend the Football team won the San Diego CIF Divison III Championship.  The first CIF Championship for the program in over 20 years which also qualified them for the state football playoffs!  ​

​This past weekend the Vikings traveled to Orange County and defeated Huntington Beach Marina High School to capture the Southern California 4-A Regional Championship!  This is the first time for this achievement in school history and is fantastic for our football program, athletics and entire school community!  Now the Vikings travel to play for a California state title against Northern California 4-A champion Escalon HS, just north of Modesto.The program will need to travel as a team of approximately 65 to Modesto on Friday for the Saturday 6:00pm game.  CIF and the San Diego Unified School District give the school only a small portion of the funds needed to cover the team’s trip which includes bus transportation, lodging and meals for the players and coaches.  The team needs to quickly raise some major funds to cover the expenses of the trip.

The team has been playing inspired football and representing LJHS with great skill, sportsmanship and passion all season!  Please help support the team’s urgent financial needs to make their State Championship weekend journey a reality by making a donation through the Foundation of La Jolla High School.  All donations are tax deductible and will go directly to support the football team’s journey to bring home the State Championship!! 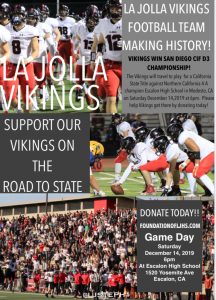