Reed Farley, senior, broke the 1000 point barrier in early December.  Reed, a varsity player since his freshman year,  currently ranks third in all-time scoring behind Grayson Moyer  04′ with 1,772 and Steve Higgins ’70 with 1,342.

Farley has also been nominated to the McDonald’s All-American team. He is one of 56 California athletes to be nominted for this outstanding basketball achievement.

Reed will continue his basketball career at Harvard in the fall of 2017. 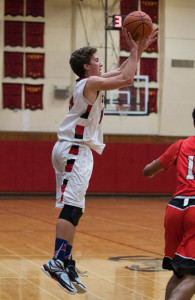